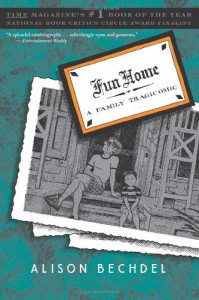 I heard about this book from different Book Riot contributors. When it (and the follow up) went on sale, I picked both up. This is my first graphic novel-style memoir, but I like the subgenre. However, the story of Bechdel and her dad was uneven, so I waffled between 2.5 - 3 stars, finally rounding up.

The art is fine - blues, whites, and blacks are the only colors and the drawings are streamlined. The font is the same throughout the book, and was readable (I read it via the NOOK app on my phone). But the art really isn't the focus of the book - the relationship between her dad and Alison was.

I really enjoyed the story when Alison focused on her growing up years and her college years. They were the most natural voiced part of the story. Unfortunately, Bechdel decided to add heaping mounds of how Proust, Fitzgerald, Joyce, and other (this reader's opinion) insufferable writers described or fit in with her family's dynamics. The belly buttoning gazing went on for pages. I can't stand literature analysis and breaking down every sentence, metaphor, or simile to find the symbolism of it all - this is why I majored in History and not Literature. The story also jumps around time-wise; we get scenes from her childhood in the 70s, flash forward to her dad's death, go back in time to her college years, back to childhood, etc.

I had two issues with the story: 1) the use of slurs and 2) the possible bi-erasure. With the first issue, Bechdel uses the words "pansy" and "sissy" in describing her father, even when she may have had inklings that she was queer herself. I felt she could have used other words to describe the very real situation/topic (gender norms, gender fluidity, and self-expression) that I felt was important to the story and to the larger picture of queerness identity. The second issue was Bechdel trying to pigeonhole her father as gay to connect herself and him, rather than entertaining the idea her father was bisexual. That rankled a lot more than the first issue. It seemed her gayness was somewhat validated/justified if he was squarely gay. I really enjoyed learning about her queer journey (not just lesbianism, but gender self-expression as a more butch/less feminate), and to see/read her label her father in very strict terms was a bit jarring.

I think Bechdel has an unique voice and style and I am glad I have the follow up book ready to go; but a lot less trying to tie herself/family/life to the cannons of literature would have made this book more enjoyable for me.