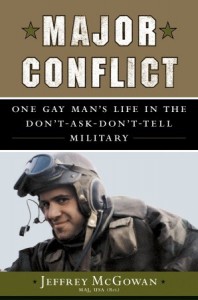 I really enjoyed reading Maj (Ret.) Jeffrey McGowan's memoirs about being gay in the US Army during the Regan, Bush, and Clinton administrations. His story is more than about his sexuality; it is also a snapshot of a great shift within the military. He describes the Regan years as a military focused on one particular enemy (the Soviets) and flushed with money and equipment that gave service members a swagger and confidence in their careers. McGowan gets a front row seat to this as his first assignment is in Germany. As the Cold War ends, the Middle East wars begins; McGowan really grows up here in the desert as both a person and as a military leader. All the while, he is conflicted about his sexuality and his place in the military. Once Desert Shield/Desert Storm is over, he goes Airbourne at Ft Bragg; the military goes through an upheaval as well, as the Clinton administration comes into power. Don't-Ask-Don't-Tell becomes policy after much compromise, but McGowan really doesn't see a change in his fellow service members' perceptions of LGBT* serving (even thought they have always served!). McGowan becomes a commander of an unit that ends up putting him in the position between following the old guard and discharging a hard working private or risk defending said private and accidentally outing himself. He ends up defending the private and starts making his way toward leaving the military on his own terms.

McGowan had such a fresh voice and easy writing style; no matter where in the world he was writing about, you really get a sense of time and place. His heartbreak is real, but his growing confidence in himself to come out was something to root for. This was written and published 5 years before DADT was repealed.