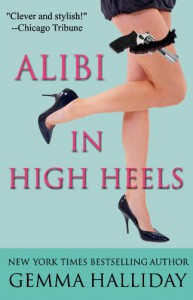 In this installment, Maddie is contracted to provide her original shoe designs for Jean Luc's show at Paris Fashion Week. Her career has been on the move up for a while and this showing would help put her on the radar of fashion insiders outside LA. Unfortunately, one of the models for the show ends up dead in a similar way to how Maddie killed the killer from book one. Needless to say, suspicion falls to Maddie and she goes about trying to clear her name/find the killer. Tabloid reporter Felix Dunn is there as well, in a different capacity than reporter. Felix tries in a variety of ways to get Maddie to see his feelings for her, but she has eyes only for Ramirez, who comes out to Paris to keep an eye on Maddie after the first murder.

This installment was more about Ramirez and Maddie's relationship than finding the killer. There is a major break through on Ramirez's part. I knew the killer the moment they were introduced to the story, but the motives for the killings was left to the last minute. That ending was romantic and emotional. As for the "love-triangle", it really wasn't - there were moments in the book that showed Maddie only wanted Ramirez, despite Felix's overtures. Usually those moments were when Maddie was at a low point or in peril; her first thoughts were always about Ramirez. She had to be reminded by Dana about Felix's feelings for her multiple times.