Review: A Family for Christmas (Texas Grooms #3) by Winnie Griggs 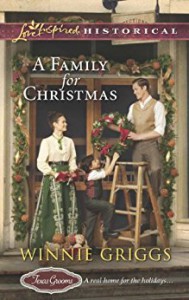 This inspirational historical romance started with a lot of promise to be another excellent book by Ms. Griggs, but fell flat after the first 25% of the book. I will say this is the first book in the series I read and I had no problem with the world building or keeping previous relationships straight in my head, so the books can be read out of order without a problem.

Eve (the heroine) is on her way to Tyler, Texas for employment opportunity/banished from the family home due to her "behavior" issues; however, she leaves the train in Turnabout, Texas after problems involving a 10 year old stowaway on her train come to light. Not one to leave an unchaperoned minor to his own supervision, she takes physical guardianship of the Leo. I really liked Eve in the beginning; she was feisty, but only in defense of Leo and was the only one to see a lost boy rather than a criminal.

At the train depot they meet Chance Dawson (hero) and Dotty Epps, who take them in and give them shelter and food. The sheriff works to verify Leo's story. This is all good.

Then the book takes a turn into a too-sweet story. Chance is a little too perfect of a hero that it was hard to believe him as a real character; he was given a back story (functionally illiterate and the black sheep of a well to do family in Philadelphia) that had potential, but never really materialized into something that matters. Eve was a wet blanket of a heroine and scared of her own shadow to boot; she was so boring to read and tiring being in her head. At this point I just read without being invested in the story, which turned predictable plot twist after predictable plot twist. Everything is coming up roses until Eve gets into a bitchy mood and is unforgiving and selfish about Chance's secret - she blew up at him for admitting he is illiterate. I couldn't even with Eve after that...she needed Dotty to verbally slap her upside the head for her to realize her reaction was less than awesome.

I recommend skipping this installment of the series.