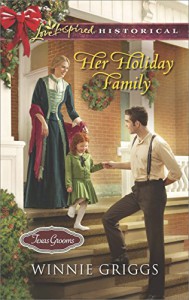 This was a much better installment of the Texas Grooms series than the previous holiday one I read last month. It was more balanced between sweetness and seriousness and was overall more realistic.

Mrs. Eileen Pierce is a young widow and person non grata in Turnabout, Texas. She had a pampered but very lonely childhood, followed by a marriage where she was seen as a good hostess and a pretty thing to look at and dress up/show off.  Her short marriage to her husband ended when he embezzled money from the bank to pay bills that came about from his luxury lifestyle and he committed suicide when people started looking into the bank's affairs. She had to sell most of the marriage's possessions to pay back the money her husband stole, but her fall from the town's graces is more to having a husband die via suicide than the downturn in financial affairs. Dovie returns, as she is now living back in Eileen's house as a boarder (she was living with Eve and Chase in the last book I read). Dovie is more like Eileen's confident and mentor. Eileen's one friend in town is Dovie's foster daughter Ivy. Eileen's world is very small.

Enter Simon Tucker, bachelor and carpenter who is escorting a family friend and her ten foster children to their new home in Hatchetville. They stopped in Turnabout because the family friend/foster mother had a stroke on the train and that was the first stop. While the doctor in Turnabout sees to Ms. Fredrick, Simon is in need of shelter and food for himself and his ten charges. At a church meeting, social pressures force Eileen to open her home to the temporary visitors to Turnabout. Ms. Fredrick passes away and Simon has to make some tough decisions now that he is the sole guardian of the group. Simon had a rough childhood, but has made the most of his opportunities since reaching his majority and decides to treat all people with true respect and dignity, no matter what the locals have to say about anyone.

Eileen and Simon were so well matched and fun to get to know as a couple. There was a strong chemistry between the two that when they finally kissed, it was worth it. Eileen grew a lot during the course of the book, gaining confidence in her abilities beside being pretty. And thankfully Simon was not the picture-perfect hero; he had his flaws just as Eileen did.  Dovie did her part time and again to help them along on their journey (much as she did in the last book), but without needing to lecture Eileen or Simon on how they are treating each other. Ten kids in a romance is a lot, and not all of them got screen time, but none were annoying or cloying sweet.

Just an enjoyable way to spend the afternoon.