Review: All By My Selfie by Jo Noelle 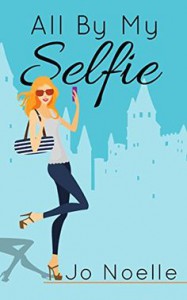 A freebie from the NOOK store. The author does the heroine in this book a big disservice in the prologue of the book and it tainted my view of her - Gwen has only been married a month to a guy that she "guessed" she was "supposed" to marry and live happily ever after but she has never been in love. Consequently, Gwen's new husband files for divorce one month after the wedding, and even though Gwen's thoughts and feelings about him and marriage in general is "meh" she is suddenly gobsmacked at this turn of events. Not the smartest tool in the shed is Gwen.

The hero is late medieval Scottish laird Niall McLeod, so is not quite a man, not quite a ghost. Rather he is living in a state of stasis thanks to a curse by druid princess (Sorcha) who also got caught up in her curse and is hanging out with him until the curse can be broken. The curse is weirdly set up that Niall and Sorcha are awake for 10 days every 10 years.

The story is broken into alternate chapters narrated by Gwen and Niall. Oh the Scottish dialect was used almost to an abusive level.

It just so happens that a year after the divorce, Gwen hates her job at the law firm and inherits a Scottish estate from her grandmother. Gwen throws caution to the wind and goes to a different estate in Scotland because her dreams tell her to go there (McLeod Castle). There she meets Mrs. Fowler, the owner of the castle-turn-bed and breakfast, Niall and Sorcha. Gwen's dreams also detail the ritual needed to break the curse and Mrs. Fowler helps out. Gwen's constantly taking selfies of herself, which is how she (and the reader and then eventually Niall) finds out that she can see ghosts and memories. Gwen can also touch the castle walls and antiques from Niall's time and get flashbacks to the events surrounding Niall's state of being. So I am calling this for the haunted houses square.

I didn't believe the romance between Gwen and Niall, but I liked the ritual and Mrs. Fowler. At least it was a quick read.