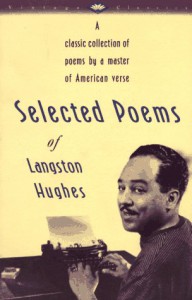 I read this for the Winter Solstice square. I am not at all familiar with the Harlem Renaissance period, so I went in with no expectations or background knowledge other than I knew Hughes was a poet from this era.

Most of the work in this book is short; I could not really get the full picture of what Hughes was describing. I think part of my problem was how the book was sectioned; I really enjoyed the Magnolia section, but the Madam series and the Dream Deferred set were tedious to read after a while. Hughes writes to a beat that is hard to flow from one poem to the next. I'll be honest and say the most I enjoyed of his poetry is when he is talking about race and racism - he really got to the heart of the matter without fussy details and still had historical details to give context and more meaning behind the poem. Many of these poems dealt with the lingering consequences of slavery and the Civil War with the present day of Jim Crow and the migration of Southern blacks to the north and west during the late 1800s and early 1900s.

Because there was no unifying theme to the book, it felt like the poem's subjects were all over the place and there was no feel to poems connecting to create a big picture. As an introduction to Hughes work, it worked okay but I think it would be better to read his single published work rather than an omnibus.