Review: I Know What I Am, But What Are You? by Samatha Bee 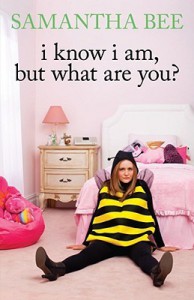 Samatha Bee grew up in a dysfunctional family in the free-wheeling days of the 1970s and early 1980s. While I liked her style in re-telling some stories from her childhood, her family was just too weird/disturbed to really like any of the stories she told. The humor I expected from Bee came from the later stories of her times in college and her early days of acting/comedy. I would love to see her write a book about her marriage to fellow actor/comdien Jason Jones; the stories she told of them meeting and falling in love were the best of this memoir. Overall, a quick but meh book.