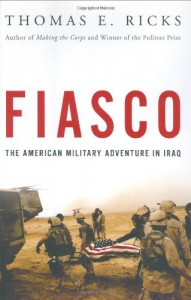 This is the Story of The American Military Adventure in Iraq. The Heart of the story Fiasco has to tell, which has never been told before, is that of a Military occupation whose leaders failed to see a blooming insurgency for what it was and as a result lead their soldiers in such a way that the insurgency became inevitable.

I was too tired to read and didn't want to listen to podcasts while playing Star Dew Valley, so I went searching my library's electronic audiobook selection. I had been meaning to get around to reading Fiasco, and an available copy was sitting there waiting for me.

I can't recommend this book enough. It takes you through both the military planning and civil planning of the war (or as we have seen, the lack of planning), plus all the players using the media and political maneuvers to get popular opinion on their side. This is the beginning of the rise of ISIL/ISIS. Nobody comes out of this book a hero, but I never knew my depth of contempt and disgust for Power Point before I read this book. Even the successes (such as General Petraus' reaching out to the nomad elders and others in the community) were short lived. The book ends in December 2005, but there is a follow up called The Gamble (I am #3 in the que to borrow), which picks up in early 2006.