A Talent for Trouble (Ladies of Distinction #3) by Jen Turano 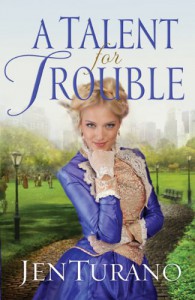 For years, Miss Felicia Murdock's every thought and action have been in pursuit of becoming a minister's wife. When the minister she'd set her sights on has other ideas, she decides something in her life needs to change--and soon--before she wastes any more time pretending to be someone she's not. If that means spreading her wings and embracing a more lively way of life, who's to say nay?

Grayson Sumner, Lord Sefton, has had his fill of spreading his wings and only hopes to settle into the life of a respectable New York gentleman. Prompted by friends to lift the spirits of the disappointed-in-love Miss Murdock, he is surprised to encounter an adventurous young lady with an unfortunate knack for stumbling into troublesome situations.

Just as Grayson decides he's had quite enough of her antics, his past comes back to haunt him and his presence in Felicia's life endangers her. As they work together to extricate themselves from this latest complication, will Grayson and Felicia decide they want to spend the rest of their lives keeping each other out of trouble?

Felicia is friends with the girl gang aka heroines from the first 2 novels and 1 prequel (Charlotte, Agatha, Arabella, Eliza). At 24, she is upset and confused as the supposed "love of her life" marries someone else - someone he actually has a relationship with. Felicia was under the impression that since she prayed to God four years ago to bring "The One" and the new minister showed up the next day, so that must be the man God wanted her to marry. Even though she had to change everything about her (clothes, manner, etc) and be the epitome of a charitable and subdued minister's wife. When that minister ended up marrying someone more suited to him, Felicia was left wondering just go God had in store for her.

Enter Grayson, Lord Sefton and Eliza's brother. Grayson lived a life of danger and excitement and saw Felicia for the spirited woman she was but also for the natural charitable woman that she was - giving her clothing away to the local theater group and to sex workers (clothes she originally bought to impress minister). She helped old men and young children alike, whenever she saw they were in need of help. Grayson appreciated Felicia for who she was without the piety and artifice. And he showed her a world of adventure, including Chinese opium smuggling, warring drug families, reuniting Ming with her real parents, and the adventure of being an adoptive mom and new countess.

As usual, I loved the banter and quick wit of the dialogue. This is a fast paced story once Felicia gets over "losing" the minister; the long time reading this was because I was busy with the move.