Feeling No Love....And Feeling Guilty About It 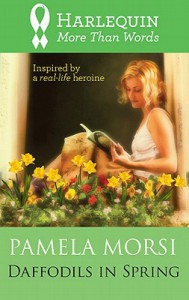 This book is one of a handful of stories that make up Harlequin's More Than Words(MTW) series. MTW is designed to be fictional stories based on real life social, environmental, and welfare organizations. Many popular romance novelists give up their writing time to write these books (Jill Shalvis is one example). Daffodils in Spring is based on Karen Thomson's organization Literature for All of Us, dedicated to providing book reading groups for disadvantaged teens. The group sessions include the teens' personal writings as well, in a space that is non-judgmental. The friendship and literacy results in better school attendance, better grades, and better graduation rates. (http://www.literatureforallofus.org/)

Because the story is based on a true social organization, I am not giving it stars or much of a review. I see the writer's perspective of taking a fictional account of someone going through the program and bettering their life and that the story acts as PR for the organization. With that said, here is what I liked and didn't liked about the story itself:

Jazleen was probably the most real character for me. I loved her journey towards self-acceptance and taking control over her life, especially wanting to go to college after a few months of belonging to the book club.

Laundry Sinclair is not a pushy hero but one that, due to his job as principle of an alternative high school, sees potential in relationship with Calla when she has decided her first marriage was enough love for her (her husband died 5 years ago in a job-related accident).

Calla is a caring mother, but acknowledges that there is a lot of negatives out in the world that could tempt Nathan away from his goal of going to college. Once she starts working with the organization, I finally saw a complete women, not just the mother role.

Laundry's and Calla's developing relationship based on shared interests outside the bedroom. Both were in their forties, so there was no need for YA/NA drama. Note that there wasn't much sexual tension - a few chaste kisses and hugs.

Calla's attitude towards teen girls, especially Jazleen, in the beginning of the story reeked of slut-shaming. She was very protective of Nathan's sex life, which bothered me as much as a father protecting his daughter's sexuality. Nathan had a good head on his shoulders and aside from heavy making out sessions, he kept things chaste with Jazleen. It was problematic for me for a grown woman judging this teen as a slut just because the teen showed interest in her son and didn't wear proper or "church clothes" to Nathan's award ceremony.

Neighbors were written with little more than one dimension - the wise elderly lady, her gossiping daughter, the noisy kids down the street playing outside. The story takes place in Chicago, yet after reading the story, it could have been set anywhere. There was no local flavor.

Laundry asking Calla to marry him at the end...so was not needed. They knew each other all of 5-6 months. I just found it hard to swallow, especially Calla's insistence that their relationship was friendship only, then companionship, then finally love. The marriage proposal sounded off to me. I think part of my dislike is that my hubby and I dated long-distance for 1.5 years of our 2 years together before getting married (he was stationed in England and I was stationed in South Dakota). I couldn't see myself marrying him after only knowing him 6 months (and there was one month when he was TDY in Israel).

Absolutely no physical descriptions of the character save for Laundry lean build and Jazleen's butt, legs, and hair - from Calla. As I was reading, I suspected the family/neighborhood was African-American, but that just could be from my own set of bias interpretating little details like  "church clothes". It was hard to visualize the characters, which took away some of my interest from the story.

As the book (along with other e-books from the MTW series) was free (for NOOK at least, don't know about Amazon or other e-retailers), it wasn't bad, just could have used more detail and less slut shaming. It was a decent effort and worth the hour of my time it took to read it (yeah, it was way short and a lot of the book was filler on the organization by two editors and the author). I downloaded a bunch of these stories and will continue to read them, I just hope there is better writing in those.