Different than many other books...and that is a good thing 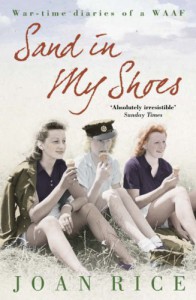 The title is in reference to most history books about WWII; this wasn't some ace pilot's biography or a dry look at the British effort. This is the diary of nineteen year old Joan Bawden. She was a member of the volunteer corps that made up the Royal Air Force (RAF) Women's Auxiliary Air Force (WAAF). On December 18, 1941, Britain would go on to conscript all single women between 20 and 30 years of age. Joan's story begins at RAF Hendon in September 1939, where Joan hopes her life will change and she will too:

I'll explain my reasons for joining. Firstly, doing one's bit. I suppose that's there, though it doesn't seem particularly in evidence at the moment. Secondly, this life will get me away from home, make me adult and independent. Thirdly, it's a change and adventure. Fourthly, and at the present most strongly, I want to swank around in a uniform. (p.4)

This paragraph sums up all the reasons I and many of my friends in the service joined the military, which proves that the more things change, the more they stay the same. Most of us joined after OIF kicked off, so we knew what we were getting into when we enlisted. Some are still in and others got what they wanted and needed from their experience in the military and moved on. I was medically retired in 2013, so I didn't get the choice, but I am profoundly influenced by my military career even in retirement.

There are descriptions of the Blitz, the Phony War,  and pilots she knows dying. There are also descriptions of enjoying oneself, for you are never promised tomorrow when the world is at war. Joan gets her commission, her job as a photographic analyzer for reconnaissance bases, and gets an assignment to Egypt where she meets her future husband. Along the way, she eats (and eats, and eats - I don't know how she kept in shape and looked good in her uniform...I had to eat rabbit food and ran for miles for almost 9 years to stay within standards), drinks, dances, and shops. She also has her more somber moments, such as

Today I have been hearing about the state of events in Belguim and Holland: fear-mad men and women on a refugee ship bombed and machined-gunned by Nazi planes and having to be shot by the ship's sailors, terror having made them beyond any control; the tattered orderless ribbons of the butchered Army; the unbelievable horror of man's inhumanity to man. (p.58)

I definitely saw the maturity as Joan became an independent woman. I think that is what attracted Hugh (future husband and their relationship is discussed in the last third of the book). Joan would leave the service at the end of her enlistment; by then she was married to Hugh (the book ends at their engagement) and expecting their first of three sons. That son would be lyricist and composer Sir Tim Rice (of Aida and The Lion King fame). She would also travel with Hugh on his diplomatic tours and she kept up with her writing, publishing in magazines and short stories. Her granddaughter (Tim's daughter) is novelist Eva Rice. Tim wrote an introduction to the book, along with Joan; Eva wrote the afterword. As Joan mentions, the publishing world didn't want anything to do with war stories after the war; it was only after her granddaughter read her diaries and sent them to her agent/publishing company, did the idea of publishing her diary seem a possibility.

Joan Rice died on May 2009, three years after the book was published.