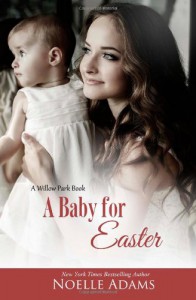 If you haven't noticed the trend, I like to celebrate different holidays/opening days/seasons, etc with stories with that theme. Well, I picked up this ebook for 99 cents and figured this would be great to read this weekend while I hung out with family and friends down at the river. I finished this book early yesterday morning, so it didn't last most of the holiday (NOOK page count was 145).

Noelle Adams is a new to me author; I had previously downloaded her other story in the series (Married for Christmas, the first book in the series), but had not gotten around to reading it yet. This was not a problem at all; Ms. Adams wrote all the stories to be read as  stand-alones, and there was not any scene used for sequel bait. There is a third book due sometime this year.

As for the story itself, I was really rooting for this couple. Micah and Alice grew up together and were friends, but one summer both realized they were more than friends. Then Micah went off to college and strayed from his faith and moral standards. Alice compared her boyfriends to Micah and tried to make those relationships work. All she had to show for her efforts were two broken engagements; she returned home to Willow Park, NC due to a job loss. Micah's wild ways caught up with him in the form of a five month old daughter he didn't knew existed (hence the title). Cara was placed in his care due to her mother (Micah's one night stand) dying in a car accident a few months ago and her grandparents could not care for her due to advanced age and chronic illness. About the time Alice came home was the time Micah decided to change his ways and clean up his act. Alice and Micah were damaged, but there were good, normal people underneath the brokenness. The angst was there, but not the big black cloud that hangs over everything. Their journey to healing, love, and parenting was great.

I wish more contemporary romance authors would write female MCs like Alice; if they did, I would be more willing to read contemporaries. Alice was not perfect, but she was introspective about her part in her past failed relationships and how she learned from those. She did not know instinctively about babies, but she had the heart and hands willingly to help Micah take care of Cara. She also had her own life and was searching for a job that met her career aspirations (university librarian) while working two jobs to pay her bills now. She was mature, smart, and someone you could have a coffee date with and be comfortable. The best part of Alice was what the author avoided -- Alice never slut-shammed, insulted or blame Cara's mother for how her daughter was conceived. Nor does she shame Micah for his past ways -- she was more interested in his comeback and helping him deal with parenthood. Alice was a strong character without women/slut shaming any other female character.

Although the story centers around the characters' Christian faith, this is not a Christian romance. Micah swears (although he tried to break the habit for Cara's sake). Alice notices Micah's nicely toned muscle and great butt. There is a steamy kiss, and Micah wanted more, but Alice held back due to her personal morals -- yet she acknowledged she was very interested in moving forward in the physical form of their relationship. It is a "clean" story if you compare it to most contemporary romances today, but does not meet the standards for "clean" in the Christian romance subgenre. The author wrote a note at the beginning of the book that speaks to this distinction.

Why I took one star off: there were a handful of editing errors (nothing to major, but did stop the flow when noticed), Alice's heart repeatedly jumped and she got shaky whenever she was emotional (which occurred more towards the end of the book), and was repetitive regarding Micah's crisis of faith that was the climax of the story. Otherwise, this is a better than solid book and I now look forward to the other two books in the series. 4/5 stars.