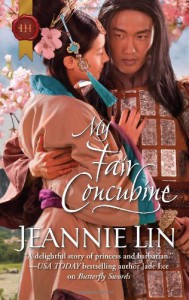 I am feeling generous so I am giving this a three. There are some beautiful passages and scenes, but taken as a whole, there was no plot. There was a whole lot of nothing but pretty scenes after pretty scenes.

Yan Ling was an okay heroine - nothing about her annoyed me, but I didn't root for her HEA with the hero either. I did like Chang Fei Long as a hero, until that ending where he decides to chuck out all his plans and work up to this point and goes for Yan Ling. Dao was okay character as was Old Man Liang, but not very developed personality wise. Li Bai Shen was a highlight in any scene he was in....he was the laughter and reminder of good times for Fei Long, a confident and teacher for Yan Ling, comic relief for the readers, and the voice of reason for the MCs. I think one of the stars in my rating goes to Bai Shen. Lady Min could have been used more, especially as a tutor for Yan Ling rather than going off to join the Buddhist nunnery as soon as she entered the story, then as a mere re-appearance at the temple to talk with Dao and Yan Ling at the end of the story.

Like I said, no plot to be found, just pretty scenes. The name of the title is way off - the only concubine was Lady Min, who was the concubine for the late Elder Chang. I enjoyed the setting of Changan (there were many gates) and just the break from Regency England or the American West.

It was a great experience doing a buddy read with Obsidian Blue, but next time I hope we get a better book.