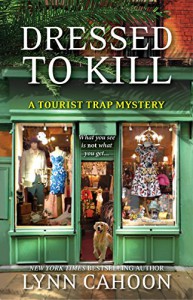 I have been striking out with romance genre lately, so I picked up this book in the cozy mystery series I have been enjoying in the hopes of getting my reading mojo back. It worked - now all I want to do is read book 5 and 6.

This installment of the Tourist Trap Mystery series finds Jill and the gang in South Cove, California enjoying the late winter/early spring weather. The author twisted it up a little and had Jill not be the one to find the dead body, or have anything to do with person who was killed. Another twist was this wasn't an out-of-towner, but a resident  - dead body as well as the killer.  There was a side plot dealing with Jill's aunt that tied in nicely with the killer's motive, but was a separate incident entirely.

I liked that Jill was finally the rescuer rather than the one being rescued in the confrontation with the killer. I agree with the killer - Det King (Jill's hunky bf) was a little obtuse with all the evidence, especially with the evidence, clues, and theories Jill feed him. I hope he isn't this dumb in the books to come after this one; I like when they bounce ideas off each other and come up with the smart, right answers. Hunky is better when it comes with a side of brains.

4/5 stars. COYER eligible. Since I was familiar with the characters and the world building, it seemed to comfort me after the disappointing romance reads - ergo, this will fill in Summer Bingo square "Comfort Read."