Review: If I Was Your Girl by Meredith Russo 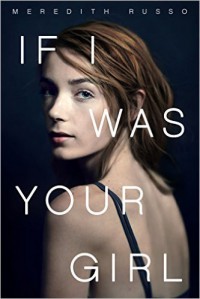 I saw the discussion on Twitter about how some reviewers found this book too happy or too idealistic. That discussion is why I picked up this book to read, so who says "negative reviews" (the reviewers gave it a 2.5-3 stars, which in my opinion is not negative, it is average) don't get readers to pick up a book? It worked on me, even though I knew about this YA contemporary book before the discussion took place.

I needed a YA romance for Romance Bingo and figured this story would fit the square after reading the jacket blurb. Yes and no....it is about a romance between a cishet boy and a trans girl, but the ending was not a definite HEA or HFN; it was very much left up to reader if the relationship would continue in the romantic way or if the couple would stay friends. So I am back to finding another YA romance from my library's shelves.

All the same, I am glad I read this book. Yes, it is highly idealistic and aspiring - however, I think that kind of representation is just as needed as the more realistic representation kind in diverse literature. The author even addresses this very aspect in her letter to readers in the back of the book. With that said, I (a cishet woman) learned a lot about how a trans person experiences life before, during, and after transition. I think this may be a good starter book for kids and teens to learn more about trans people. I grieved and cried over Andrew and the abuse he took, but I rooted for Amanda to live her truth - in my mind, they were two separate people.

The story itself was a typical YA contemporary that relied heavily on stereotypes (except those of trans people - they got a range of characterizations). If Amanda was cishet woman, this story would be completely mediocre high school stuff. Even with Amanda as a trans girl, this was still a simple story of stereotypes and gossip. And the stereotypes brought this story down for me. The worst of the stereotypes was embodied by the character Bee. I did love Chloe; she would make a great main character in another book (hopefully one with a lot less stereotypes). I felt at the end of the book that Amanda was going to be okay through her final semester of senior year and make a good life for herself. But most likely not with Grant.