Review: A Wedding in Springtime (Marriage Mart #1) by Amanda Forester 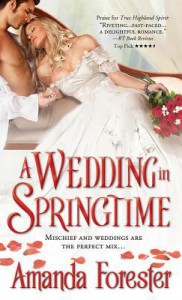 Genie screws up her debut in front of the Queen and is branded an outcast. Genie blames Will Grant for screwing up her big moment. Really, it was Lord Chamberlin's gut distress that is to blame - yep, this Regency romance starts with a prologue dedicated to a fart joke.

Her aunt and mentor decides she needs to marry and quickly. Grant is too much of a rake, so poor Genie has to impress a bunch of dull suitors when she wants adventure with Grant. Grant and his crew (a duke and an earl, aka the heroes in the other two books in the series) are also trying to figure out who is the mole in the British intelligence agency that is feeding Napoleon information regarding the British navy activities. There is matchmaking dowager, a secret marriage, a second chance for a group of London orphans, lots of fun twists and a satisfying HEA for Grant and Genie. And thankfully, there was only two balls in the entire book.

I definitely want to read the other two books in the series.