After the Eclipse: A Mother's Murder, A Daughter's Search by Sarah Perry 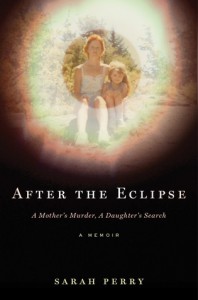 This is a memoir of Perry's, detailing life before and after her mother's murder in 1994. Sarah was twelve years old at the time of the murder and was in the home (awake, but in her bedroom with the door closed) when it happened. Part memoir, part small town true crime story, the writing was addictive and I read this book in under 24 hours. As it is written/told by her daughter, her mother is given the saintly characterization for 3/4s of the book, only in the end when the daughter did some more digging did we see a more darker aspect of her mother.

Crystal Perry (Sarah's mother) was a single mother looking for a long lasting romantic relationship and constantly coming up with one loser man after another. Turns out, that was a pattern that was learned from Sarah's maternal grandmother. Pretty much just recycle of alcoholism, irresponsible actions, and looking for instant gratification in rural Maine in the 1980s marked Crystal's life. But the reader could plainly see that Crystal loved and adored her daughter, breaking at least one of the abusive cycles. Sarah was the center that Crystal built her life around, and vice versa.

Then came the night of the murder and Sarah being interrogated by police or pitied by citizens who actually didn't give a shit about her or her mother before. Her mother's friends and family were less than able to give Sarah a stabilizing force, so Sarah pretty much finished her childhood raising herself. Honestly, these adults are barely smart enough to breathe - such incredible fuck ups. Sarah starts the next generational cycle by developing alcoholism in college, but she does well in her studies and graduates from a small Southern college. She gets some jobs and friends that help her deal with her past and her drinking problems and she levels out....until the day that Maine state trooper calls her to tell her there was a break in the now cold case (12 years on, meaning Sarah has lived with her mother for as long as she has lived without her mother) and there has been an arrest made. She returns to Maine for the trial, then back to the south to go back to her adult life. But she wonders what her mother was like as an adult, so she sets out to uncover all the family secrets and learn about Crystal in the hopes of getting some closure.

The book is told in two parts; the first part is non-linear story telling, but each chapter is titled either "before" or "after" so the reader understands where the chapter falls in the time line. The rest of the book is told in a mostly linear story telling, although it goes into rambling and a bit repetitive towards the end. A great read but more of a memoir than true crime book.