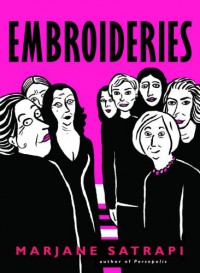 Book: I read Embroideries by Marijan Satrapi, an Iranian-French author and illustrator.

1. Drifting to You: A Cape Fear Novella and A Radiant Soul by Kianna Alexander - Ms. Alexander takes different approaches to featuring black characters who lived during slavery and then in freedom during the Reconstruction era and gives them such great love stories that are also believable (i.e., no magic babies in an epilogue when the story has the heroine with infertility).

2. Let It Shine by Alyssa Cole - I will always recommend Ms. Cole and this book in particular. Early 1960s romance between a black woman and a Jewish man that doesn't shy away from the present conflicts or the recent past. Must read it in conjunction with the short story that follows the same couple about a decade later. SO GOOD.

3. The Brother Sinisters series by Courtney Milan - where do I start? While I wasn't absolutely thrilled by one book (*looks directly at Seb and the Countess*), overall I love this series. When you root just as hard for the secondary romances as the main one, you know you got something good cooking - and Ms. Milan put on a damn feast!

4. Tang Dynasty series by Jeannie Lin - there was a bit of trouble with me not liking at all the first book, but everything that came after was good or great - the last two books (also listed as Rebels and Lovers series) were SO FREAKING GREAT. Not a duke or ballroom in sight but still gorgeous descriptions of clothes and food and adventure. Not to mention the character of Li Bei Shen who stole the show.

5. Wings of the Nightingale series by Sarah Sundin - a historical romance series featuring women in the military! And taking place somewhere other than England/France! Ms. Sundin really has great characters and plots that test those characters in some nuanced and in some very overt ways, giving the readers a real journey to go on. Ms. Sundin also avoids turning Mellie (heroine of the first book) into an exotic "other" and doesn't stereotypes her but also shows how hard it is for Mellie to fit in with the other girls. The ending of the third and last book made me cry but in such a way that I was saying goodbye to friends.

For having one night stands and not being ashamed of it (and also using protection). For the delicious way she made the asshole that drove her BFF to suicide PAY AND PAY DEARLY. For giving the big old bird to the hypocrisy to modern American evangelical system that hides behind Christian label. For giving the normal, non-toxic male a chance at a relationship with her and her really trying to keep the connection with him going since he is showing he's trying too. For telling toxic family members to find someone else to give a fuck about them because she's busy. For being her loveable sociopathic self.

I would reconstitute the High Level Task Force on Global Food and Nutrition Security (established in 2008), with FAO Director-General (Vice Chair) being replaced by chef Jose Andres (We Fed an Island). Other panel/advisor positions will be filled by Padma Lakshmi (Love, Loss, and What We Eat), Miranda (Life As We Knew It), Emme (A Sip Before Dying), and Marko and Alana (Saga series). Andres knows how to source local, fresh food in the most dire of circumstances (earthquake in Haiti, hurricane ravaged Puerto Rico). Padma Lakshmi can cook and speak to various audiences without talking down to them plus she can speak about endometriosis. Miranda knows how to work with canned goods over months without any way of getting more/fresher food during a long term disaster. Emme has the cooking skills plus budgeting and marketing. Marko and Alana know how to eat while being refugees, especially as Alana was pregnant with Hazel, so she could promote healthy eating while expecting and living as a refugee.