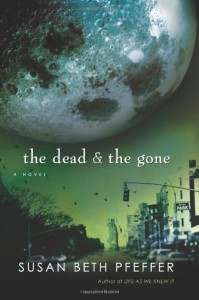 Title: The Dead & the Gone

This second book in the series takes place at the same time the first book takes place, so if you want to read this book first and then the first book you can. Both books need to be read before going on to books 3 and 4.

Alex Morales has a lot on his plate as he nears the end of his junior year at Vicent de Paul Academy. He has dreams of being the first Puerto Rican POTUS; near future dreams include going to Georgetown for college. His family moved to NYC when he was five; his family includes Papi, Mami, older brother Miguel, and younger sisters Bri and Jamie. At the start of the book, Alex is working his after school job at the neighborhood's pizza place when THE EVENT happens....and he doesn't even observe it. He's working and talking to customers. As he walks home to the family's apartment, there are signs things are bad, but he also notices its NYC and these scenes happen. Once home, his sisters fill him in but Alex isn't too worried, since grown ups in the government and experts in science are probably already working on a solution. It's NBD. This will last a week at the most.

THE EVENT, as I learned in book one, is that a meteor/asteroid knocked the moon out of its orbit and now the moon and the Earth are much closer to each other than is proper. The moon is responsible for a whole lot of regulating things on Earth as it turns out.

Papi is back in his coastal hometown in PR so that he can attend his mother's funeral. He should be back on Saturday, but he never calls/writes/anything and yeah, flying back is so not an option RIGHT NOW. But the tides are out of control and so are the tsunamis, so chances are Papi didn't stand a chance. Yet the kids don't know for sure he's dead, they just don't know if he is alive. Mami got called in to work; she is a nurse at a hospital in Queens. She, too, doesn't communicate with the kids back in the apartment; she did have to take the subway to her job, and the subway was flooded. Alex goes to Yankee Stadium to see the recovered bodies in his search for Mami, but no dice. So the kids don't know for sure if she's dead, but they also don't know if she is alive. Folks, this is a case of Schrodinger's Parents!

Miguel is a Marine stationed at Twenty-Nine Palms (dude, that sucks, sorry to hear that), but just as he is deployed he calls home to let Alex and the girls know he is okay and headed to Texas. A deployment from Twenty-Nine Palms to Texas sounds worse than my two trips to Iraq. Anyway, there is a clear sign that Miguel is okay and is being taken care of by the Marines. And then it is just a survival story of Alex and his two sisters while the world goes to hell in a handbasket. Ultimately, Alex and Jamie leave NYC on a bus headed for camp of religious survivors (nuns, priests, etc).

There is a little violence (food riot) and innuendo regarding sex trafficking of minors/young women, but there is a lot of death as par for the course with an apocalyptic tale. There is also a lot of mutual aid and helping hands; there is class inequality and how corruption and connections help people survive. There is a lot of religion in this book, but it is woven deeply into the characters' lives and beings that it makes sense to have this much religious theme without it being overwhelming. The city itself is a character, giving flavor to scenes like the one at Yankee Stadium or when Alex goes to the more well off section and sees life around him looking more normal. Money makes not normal times seem more normal and bearable. I liked Alex and his sisters right off the bat; they're smart, hard working and most importantly city kids who rely on instincts to help them out.

I plan on reading books three and four sometime this summer.