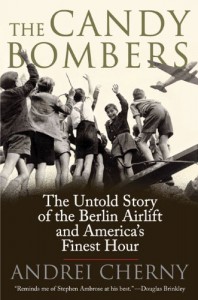 This book was a wonderful and fast read. Operation Berlin Airlift (OBA 1948-1949)  is the often-overlooked middle child of the post-WWII rebuilding-OBA-Korean War military family that led to the early years of the Cold. War. Yet, the event had remarkable importance that still goes unnoticed by most historians and history buffs.

This was the  first mission using the newly-created United States Air Force. This operation was almost all Air Force, and General Curtis LeMay was in large and in charge. The sections of the book with LeMay were a real treat, since I dealt with mostly sanitized, overly politically-minded officers when I was in.

Second, the sheer numbers of money, equipment, and supplies were incredible for a non-war event (more than 2.3 million tons of cargo into West Berlin according to most estimates). The men who worked on the aircraft and pilots were recalled just a few years after their tour of duties in the European and Asian theaters and had to readjust their lives and military education to meet the needs of the new branch of service.

The equipment (planes, tools, etc) used to move the supplies into Berlin were war weary as the men, yet aircraft maintainers were dedicated to the cause and kept the planes in the air. I may be biased, as my husband is an aircraft maintainer, currently working on aircraft that is 65 years old and still flying.

There is also political and cultural touchstones in the story as well. This was the beginning of the Cold War, long before the Berlin Wall was erected or the Cuban Missile Crisis of the Kennedy years. Not to minimize those events, but OBA deserves some respect for what the Airmen did to save west Berlin from starvation, disease, and death from the weather. Highly recommend. 5/5 stars.